A Conversation with Frank O’Reilly: The Tradition of Giving Back 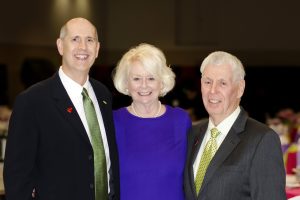 In 1983, a small group of men affiliated with Catholic Charities in Lakeland saw an unmet need in the community – their elderly neighbors had no way to get to medical appointments, the grocery store, and other necessary places. The group, including Frank O’Reilly, wanted to help and began providing free transportation for seniors in need. From this effort Volunteers in Service to the Elderly was established. Original founding Board members included Frank, Kirk McKay (Board member Paula Mims’ father), and several other local business leaders.

In the early days, the volunteers provided transportation for 30-40 clients. Today, VISTE completes over 15,000 transportation trips each year for more than 500 clients. Some use the service once or twice a year, while others, including clients on dialysis and other lifesaving treatments, much more frequently.

Originally the transportation program was available to seniors age 65 and older, and as Frank noted recently, “Few questions were asked. If someone needed services and met the age requirement, the volunteers helped.” Before long requests increased and the age limit for services was raised to 70.

Over time VISTE began offering additional assistance to seniors, including reassurance phone calls (Phone Pal program), meals, and other essential services. Local residents and businesses assisted with funds to help finance the programs. Thanks to the generosity of the community – and a large base of dedicated volunteers – all services are still free of charge to VISTE clients.

A former Lakeland mayor, commissioner, and retired investment company executive, Frank is married to VISTE’s former longtime President, now President Emeritus, Alice O’Reilly. They both have contributed to VISTE’s success in innumerable ways over the years.

When Alice retired in 2014 after 20 years with VISTE, Board member Steve Bissonnette assumed the role of President and has guided the organization ever since. Continuing the VISTE tradition, volunteerism and service to others remain the mainstays of the organization.

The volunteer program has grown significantly over the years to meet the increasing need and to help ensure that VISTE can serve its elderly clients for generations to come. Today over 1,000 community volunteers of all ages and backgrounds assist VISTE fulfill its mission: to enable elderly persons to remain safely and independently in their own homes.

At 86, Frank is still passionate about giving back to the community. He calls his volunteer work with VISTE “very rewarding” and encourages others to volunteer. “Everybody should look out for each other, especially in Florida, where there are a lot of retirees. It only takes me a few hours a week to volunteer. It’s also wonderful how young people are getting involved – I see high school and junior high volunteers helping out.”

“VISTE has been a real blessing to the community and people,” he continued. “We need for neighbors and friends to look out for each other. Back when we started VISTE, we were just doing things that needed to be done, which at the time was the driving.” 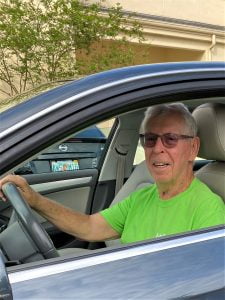 “We are all blessed in some way – health, wealth, family. I am honored to give back and to help take care of those who can’t help themselves.” The reward, he says, is the thanks from VISTE clients. “It doesn’t take money,” he emphasizes – “just volunteer!”

Frank is still volunteering for VISTE, these days as a delivery driver for the twice-weekly Hot Meals program, which serves the organization’s most vulnerable clients. One of his clients turned 91 on the fourth of July and still lives at home. Another client told him, “God bless you! I don’t know what I’d do if not for VISTE.”

“We have an obligation to one another,” Frank says. “Stay in touch with your neighbors. Stop by. Check on them. Offer to get groceries. Many live alone, and the worst thing would be for something to happen and no one knows or checks on them. The sense of community in local neighborhoods can be a real blessing for seniors living alone. VISTE is the assurance that someone cares.”

Frank counts among the high points of his career that he “had the honor of knowing George Jenkins.” As he noted, “Back then, anytime you did a community project, the first place you went to for support was Publix. Mr. George would say, ‘Yep, I’ll help you, and I’ll call the ‘Big Wheels.’ And he would call them!”

In fact, Frank said, everyone at Publix had the same philosophy. “If something is good and benefits the community, Publix will be there. This includes Barney and the late Carol Barnett, as well as the younger generation of family members, and the Crenshaws. ‘Give back’ is the philosophy. We have been blessed in Lakeland by having such a generous family.”

Frank and other volunteers also helped start several other Lakeland nonprofits, including Talbot House Ministries and Lighthouse Ministries. He admires others who help take care of those who can’t help themselves, also mentioning the good work of Gene Engle, his wife, and many others. “They never wanted public recognition or accolades, but Lakeland can be proud – there are a lot of people in Lakeland who have a decent life because of them.” He also credits local churches for encouraging volunteer service and giving back.

George Jenkins continued to be a force in the community, even in his later years after he suffered a stroke and was under the care of a nurse. Frank remembers receiving a phone call one day: “Mr. George would like you to drive him to Tampa for an honors banquet.” Frank immediately agreed.

On the day of the event, Frank and Mr. George sat in the front of the car, with Alice and the nurse in the back as they drove to Tampa. Frank noted afterwards that at the awards presentation, “Many ‘Big Wheels,’ including New York Yankees owner George Steinbrenner came up to Mr. George to shake his hand. Mr. George was in a wheelchair and sometimes his speech was hard to understand, but people still showed him respect.”

In the car on the drive back to Lakeland, out of the blue and in a clear voice, Mr. George turned to Frank and said, “Frank, isn’t this beautiful?”

Special thanks to Frank O’Reilly for sharing his reminiscences about VISTE’s early days; to Alice O’Reilly for her boundless enthusiasm and creativity; to VISTE Board Members, volunteers, and supporters over the years – and to everyone who in ways large and small has “given back” to help make the Lakeland community a better to live, especially for its elderly residents.