VISTE client Ms. Willie Ester Lewis lived alone in Lakeland for many years and appreciated receiving hot meals from VISTE, delivered by a friendly volunteer. Her daughter, Shirley Lewis Johnson, was living out of town at the time, as were other family members, but Willie wanted to stay in Lakeland in the house her husband had built for the family, and where her children were raised.

Shirley spoke with her mother daily by phone. Often during a phone conversation her mother would say how much she looked forward to the meals, but especially seeing the volunteer. Many times, Shirley said, the VISTE volunteer would be the only person Willie would see all day.

Both Ms. Willie and Shirley’s father, Sam, worked for Publix. They had fond memories of meeting “Mr. George” Jenkins at employee gatherings, recalling that he would visit with employees and pose with them for photos. Although Ms. Willie has passed on, she lived to be 89 and was able to stay in the family home in part because of VISTE services and the personal connection with VISTE volunteers. 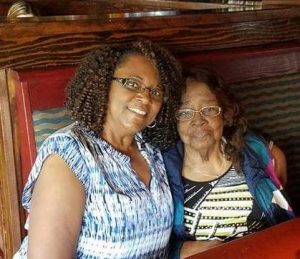 And to come full circle – Shirley is now a VISTE volunteer herself. She sorts groceries and helps decorate birthday cakes for clients age 90 and older, but she also liked helping with food deliveries. “It was a joy for me,” she said. “I met so many nice people.”

She considers her volunteer work with VISTE a way of honoring her mother and giving back to God. “VISTE was a blessing to her,” Shirley said. “God laid on my heart that if I can be a blessing to another person, I should be – and by doing good, I’m more blessed than they are!” VISTE is honored to serve clients like Ms. Willie and grateful to have family members like Shirley, who generously give back to benefit seniors in the community.