An enthusiastic VISTE supporter and volunteer for many years, Chris Asbill joined the Advisory Board in 2009, became a Board Member in 2016, was Vice Chair in 2018, and for the past two years has served as VISTE’s Board Chairman.

Chris has a supportive and effective leadership style and typically works quietly behind the scenes.
However, when it comes to VISTE’s signature fundraising event, VISTEBall, Chris is front and center, doing whatever it takes to make the popular golf-themed event a success – including serving as emcee. One of many highlights of his term as Chairman was helping to establish a professional Development program for the organization. Thanks to Chris and others, VISTE now has a full-time Development Director with a focus on long-term organizational sustainability, including planned giving. 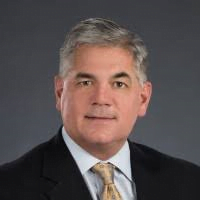 Originally from Lakeland, Chris holds a B.A. degree in Communications from Florida Southern College, where he was also on the water ski team! He has worked in the insurance industry since 1998 and is now Director of Florida Operations for Snellings Walters Insurance Agency. Chris and his wife Jill Martinez-Asbill enjoy living in Lakeland, traveling, and spending time with their families.

In September Chris will pass the gavel to a new Board Chair. Thank you, Chris, for your dedicated service, passion, and leadership!